On January 3rd, many students at my university received an email1 from yayview.com.

This View app claims to be “a new directory for each of your classes”, and this email has a snazzy design, highly unusual for college email spam. Note the design and wording makes it almost seem like it was sent out by the school administration2 for me to join some sort of new class discussion app.

This is just the very beginning of this app’s numerous tricks to bootstrap itself into popularity.

After a quick login with Facebook and a Location Services approval, you’re dropped right into the app. 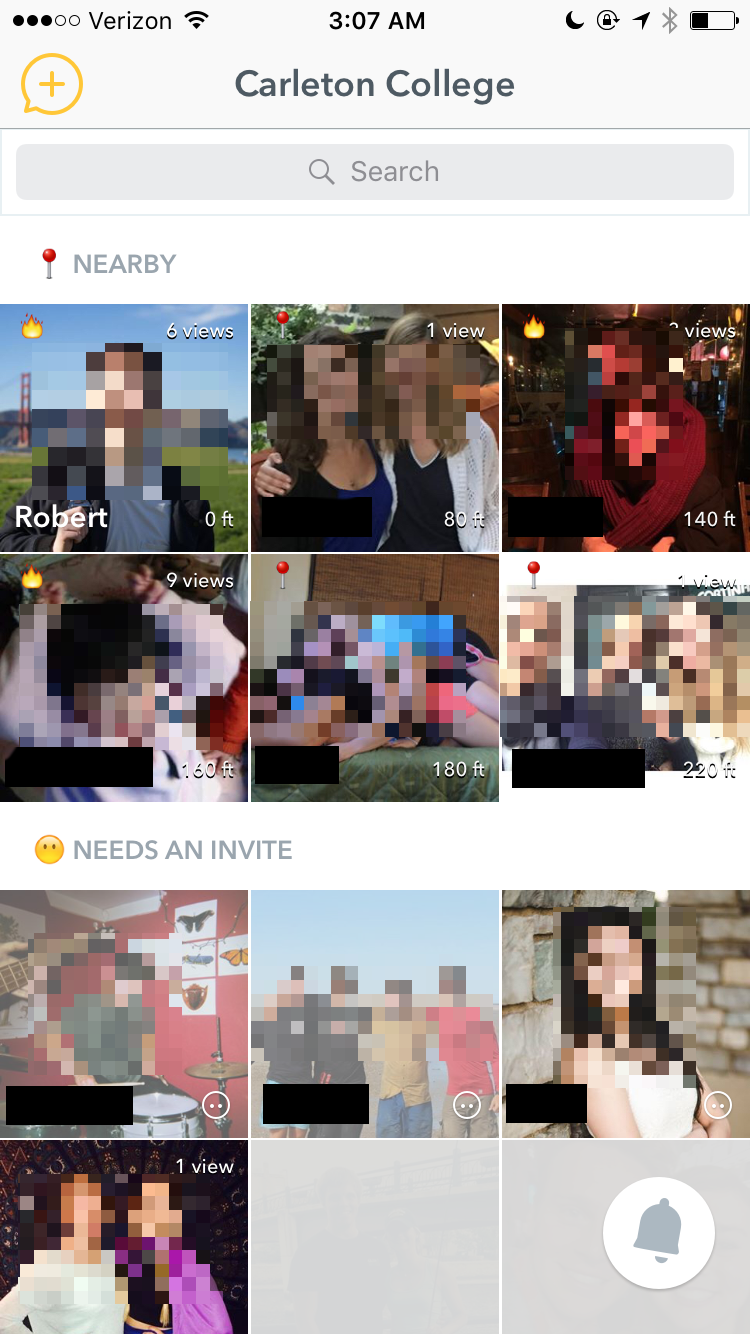 Names and faces in these screenshots have been hidden and pixelated.

It’s a simple premise. The app shows you a list of the people closest to you. You can tap on their picture to view their profile. When two students have viewed each other’s profiles, the app notifies both people3, which makes opening a profile like swiping right on Tinder. It also notifies you when a friend is nearby. 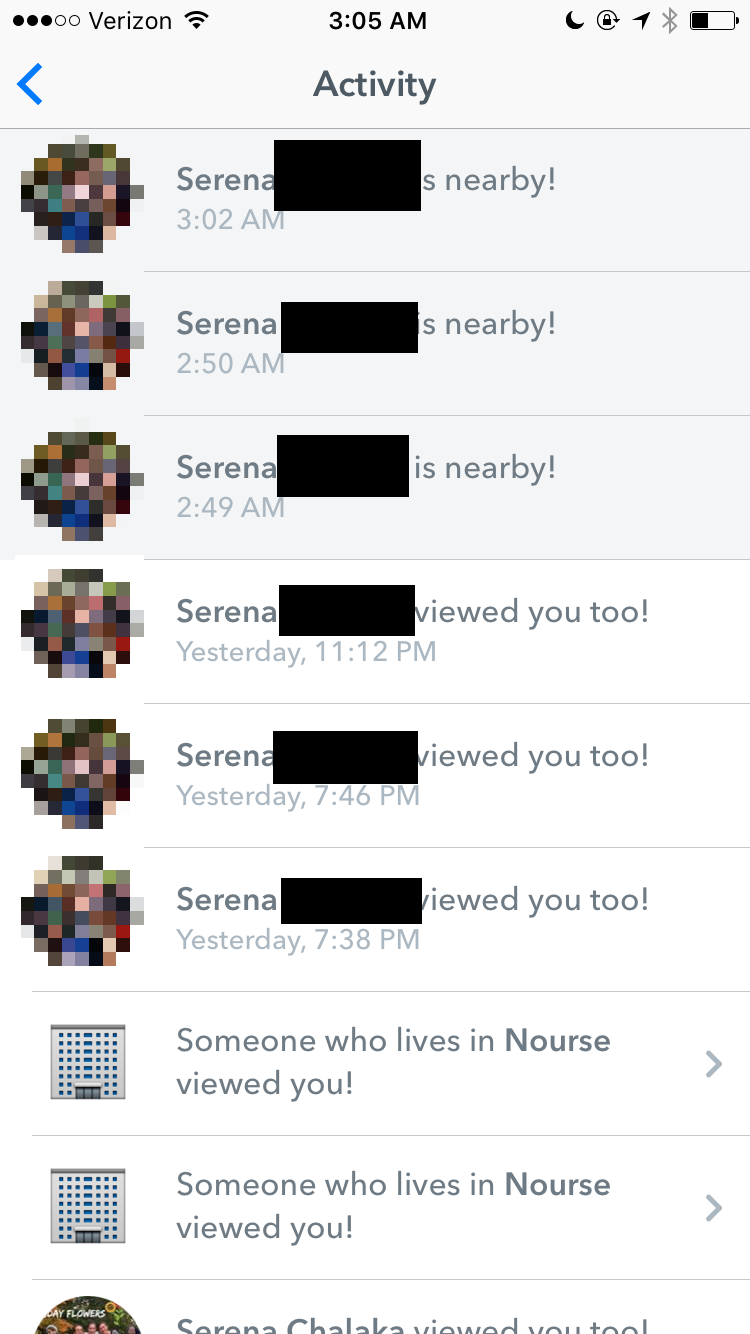 Serena, my friend, is a heavy View user already.

Profiles are also relatively tinder-esque, with images and short text fields you can fill out. Here’s my profile. 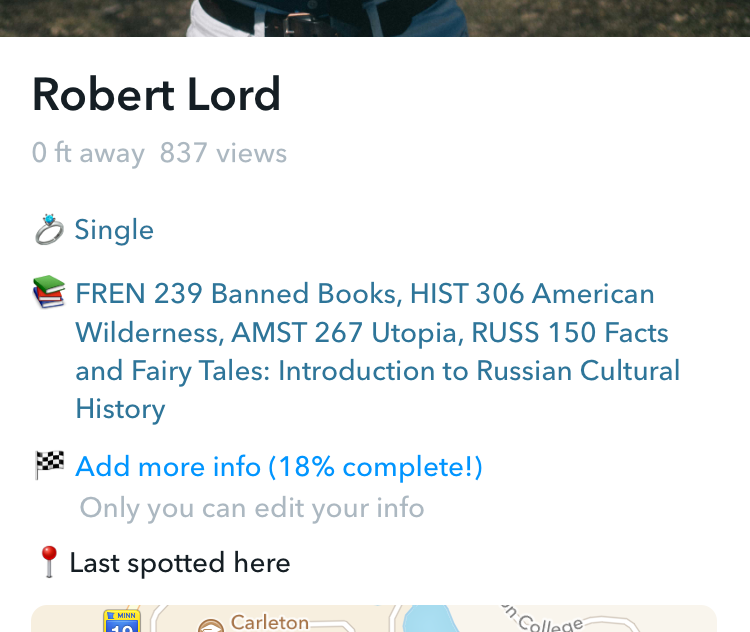 In addition to notifying people who’ve viewed each other’s profiles, the app keeps a public running total of how many times each profile is viewed. The most viewed people get a flame emoji and are put in a special list on the site. 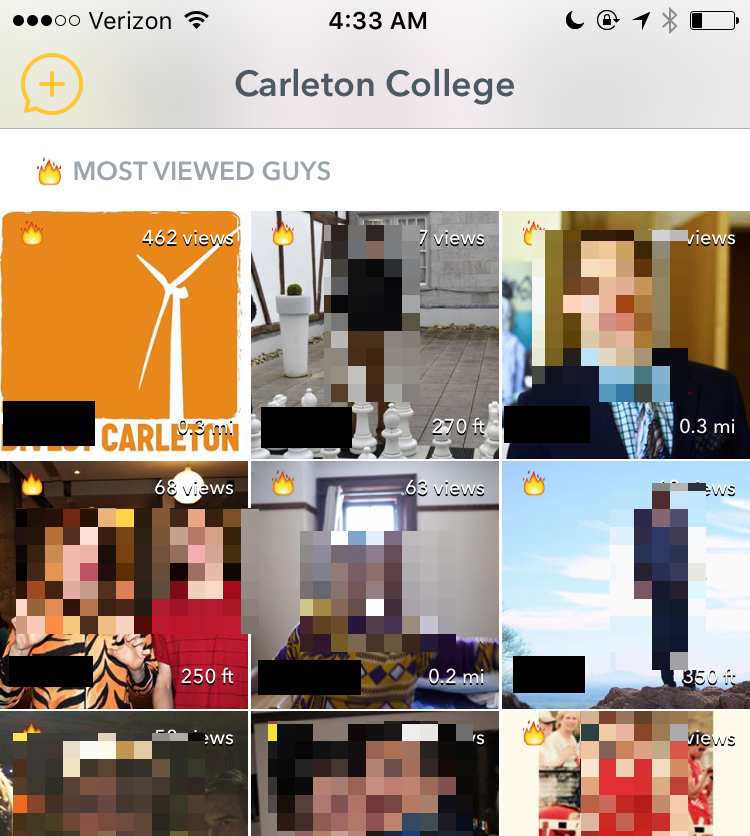 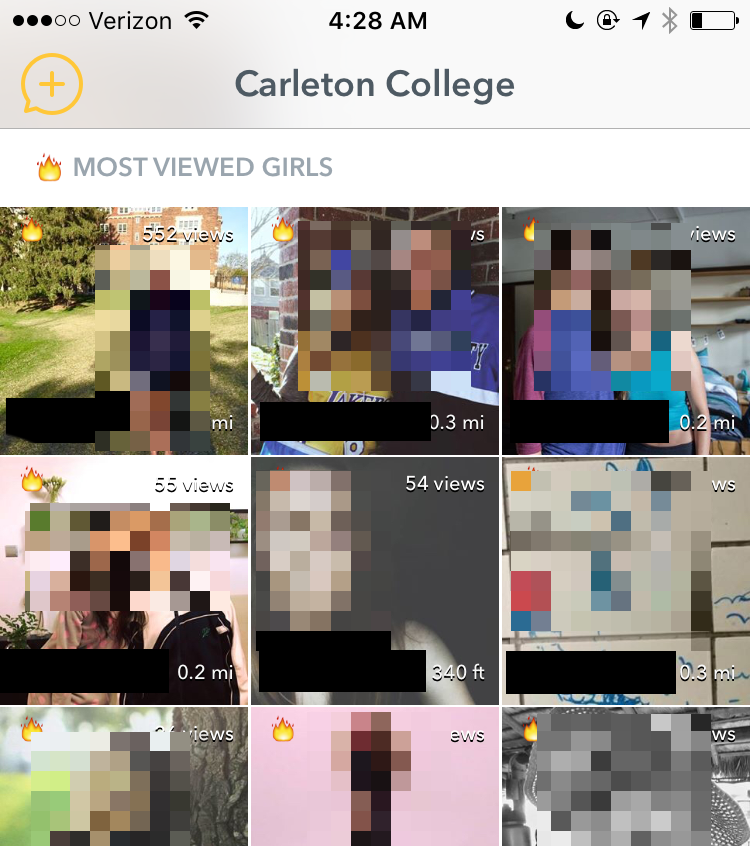 If it’s not clear to you yet — this is a dating app. Surprise. The “invitation” email lied. We’re looking at a Grindr-style “who’s closest” interface4 with Tinder-style matching, and Hot-or-Not-style rankings, all in one.

A Dark Pattern is a user interface that has been carefully crafted to trick users into doing things. – darkpatterns.org 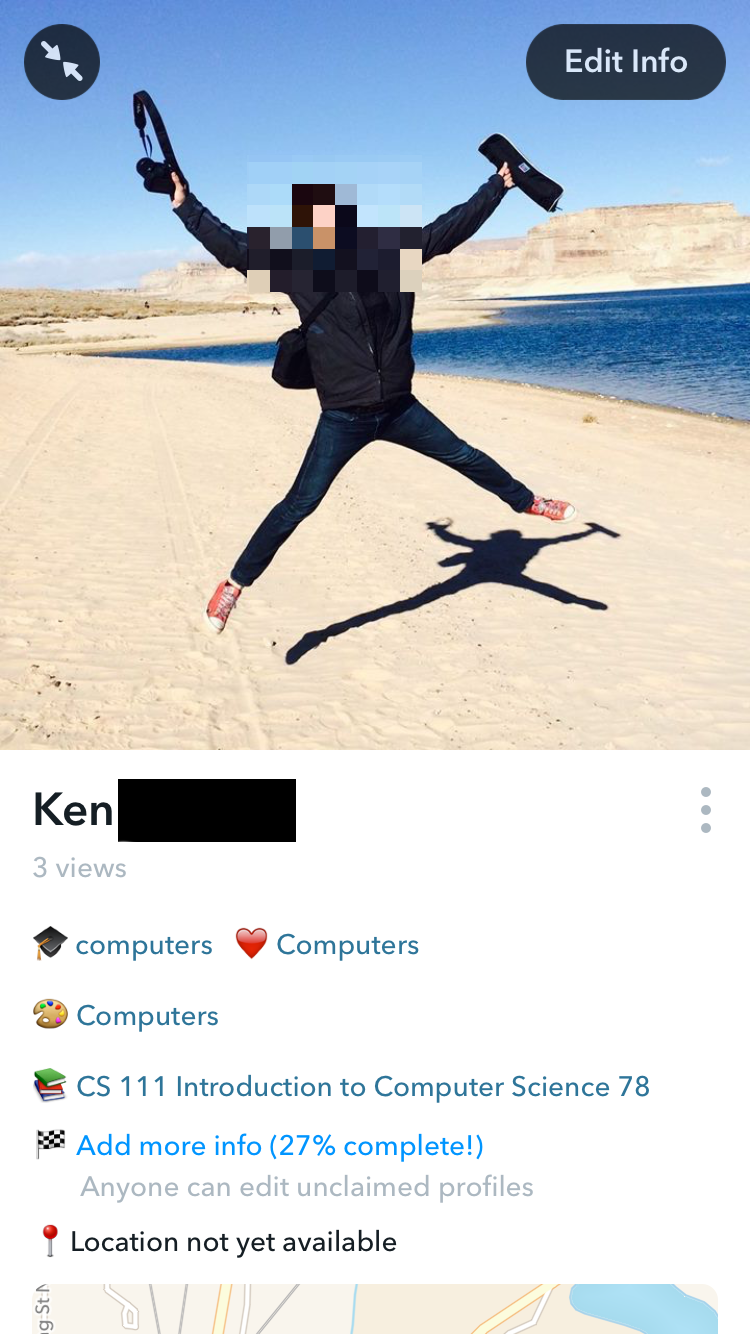 Note the link near the bottom to edit the “unclaimed profile.” Ken never signed up for View. How did it get his photos? Well, he has friends who signed up with Facebook. View scans its user’s Facebook friends for other students, and creates fake View profiles that anybody can edit, forcing users to sign up if they want to hide the weird, embarrassing information their friends posted on their page.

This Facebook-friend scanning functionality is never disclosed to users, even in the privacy policy, and View fails to clearly distinguish actual profiles from “unclaimed” profiles. This is probably a violation of the Facebook API Terms, and may even be illegal.

View also has a number of other dark patterns. During the signup process, it asks for permission to use your location. 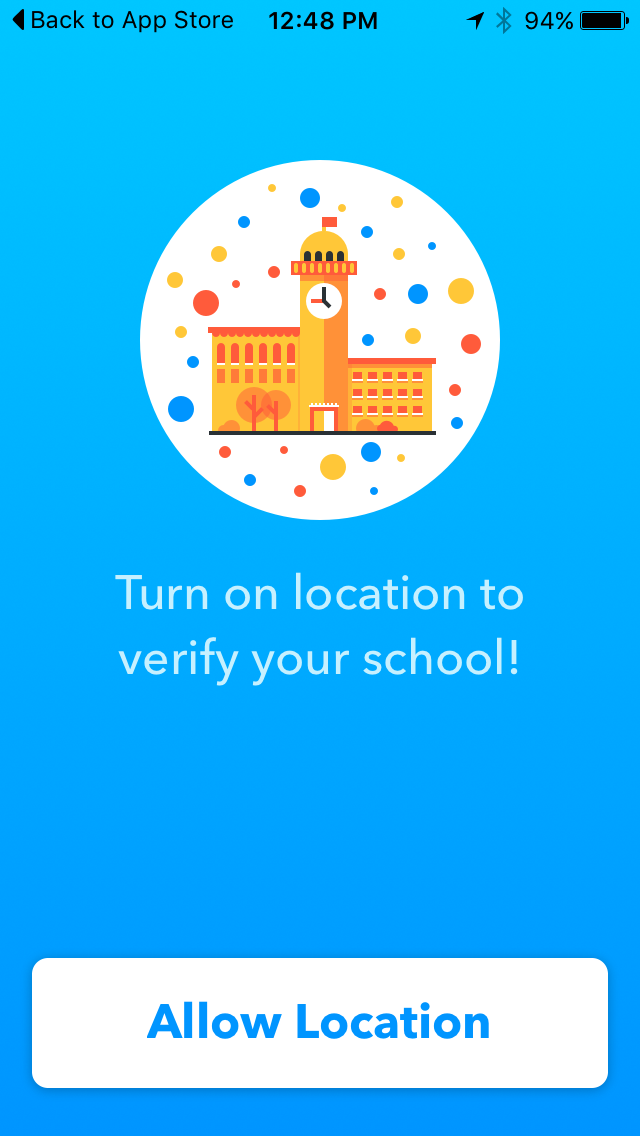 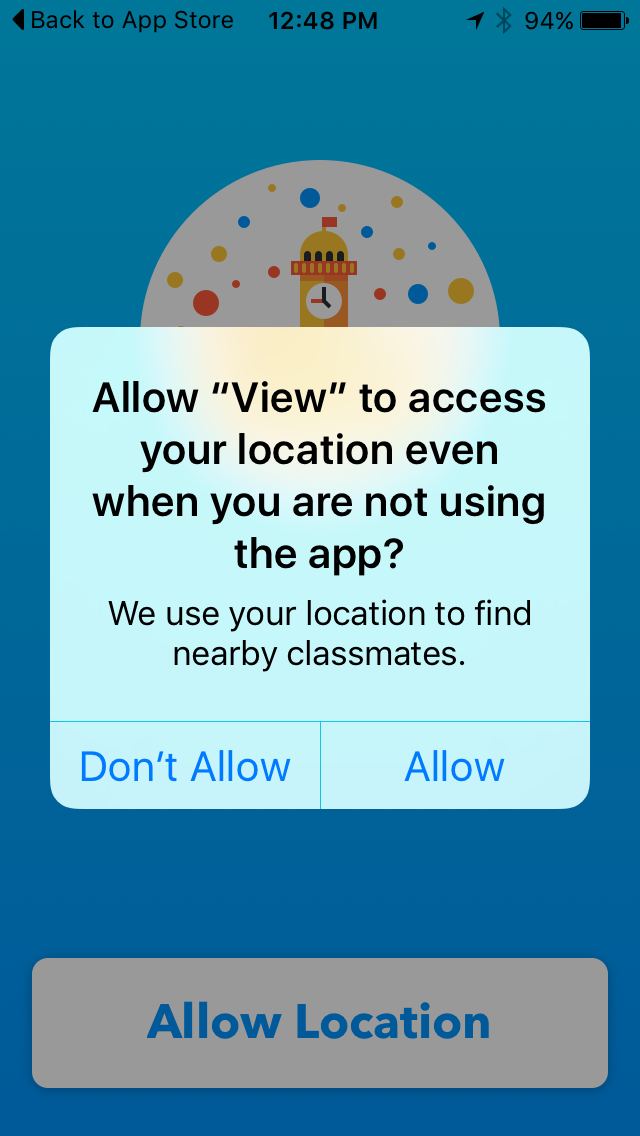 The first screen claims it’s to “verify your school”, completely omitting the fact that your location will be shared with all other students at your school, even when the app is closed. Once you actually tap the button, it says it’s “to find nearby classmates,” which still does not accurately disclose how users’ location data will be used.

Another dark pattern: tapping the unclaimed profile of somebody without an account sends an anonymous invite to that user. This is only explained after you’ve already sent it, and even then, the explanation is hidden in small, light gray text in a modal. 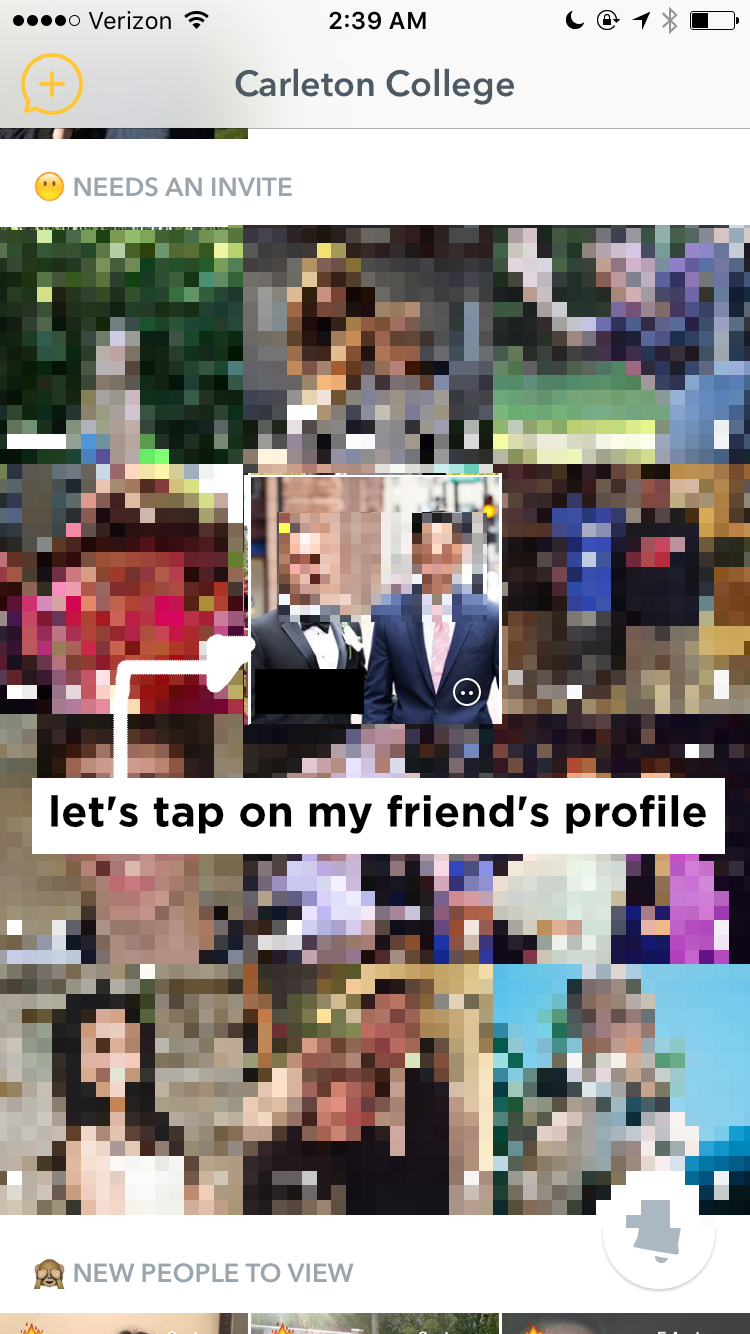 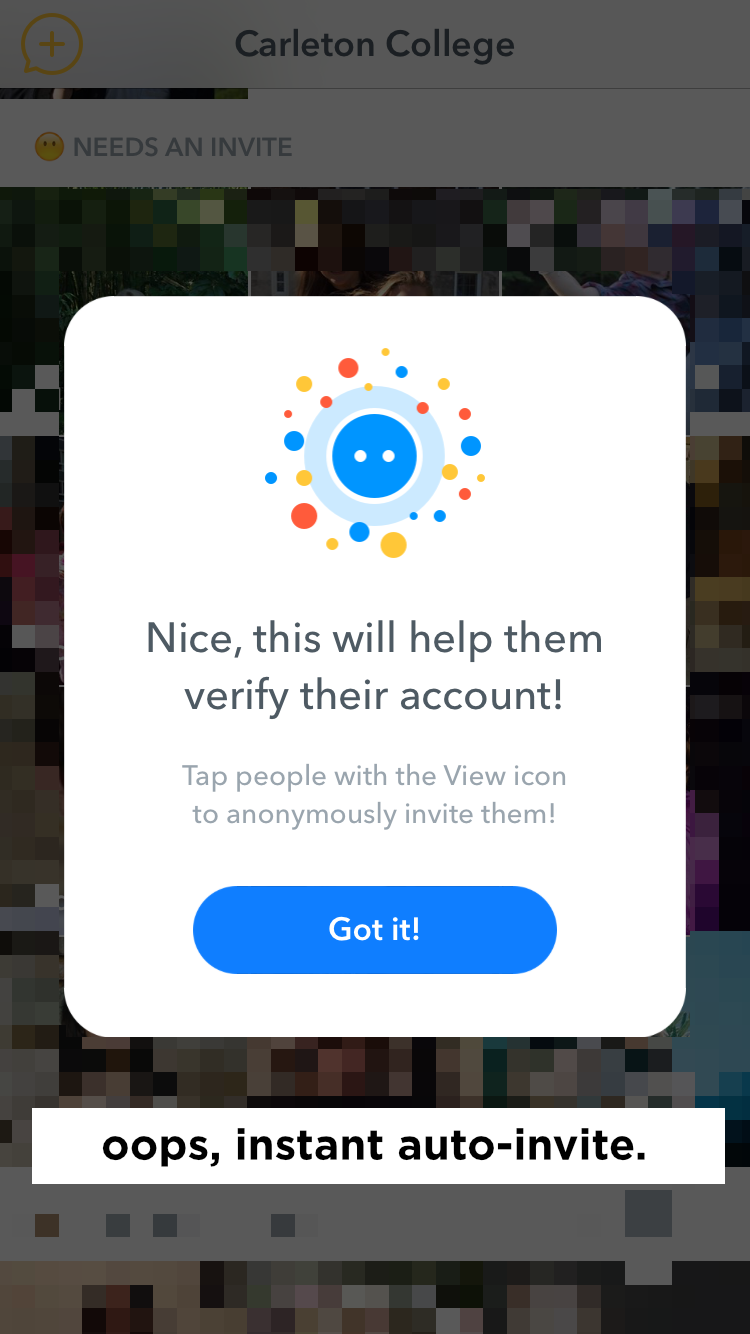 Yet another: The app at a random point also asks for your contacts, so you can “verify your account.” Like with the invitations, verifying your account seems to do nothing: 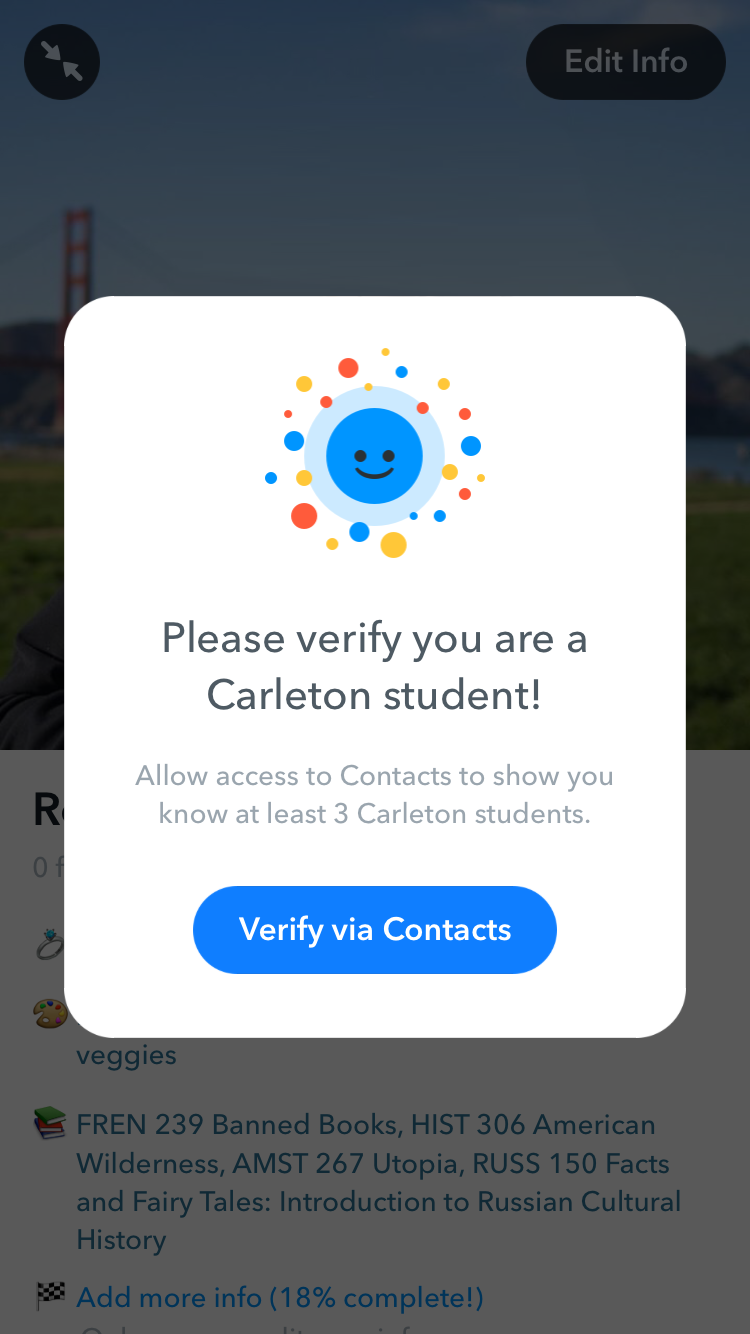 This modal makes it seem like there is no way to continue using the app without uploading all your contacts, but tapping the grey background allows you to skip it. They omitted a close button to trick users into giving them more data.

You can tell users are angry about this app. Some app store reviews: 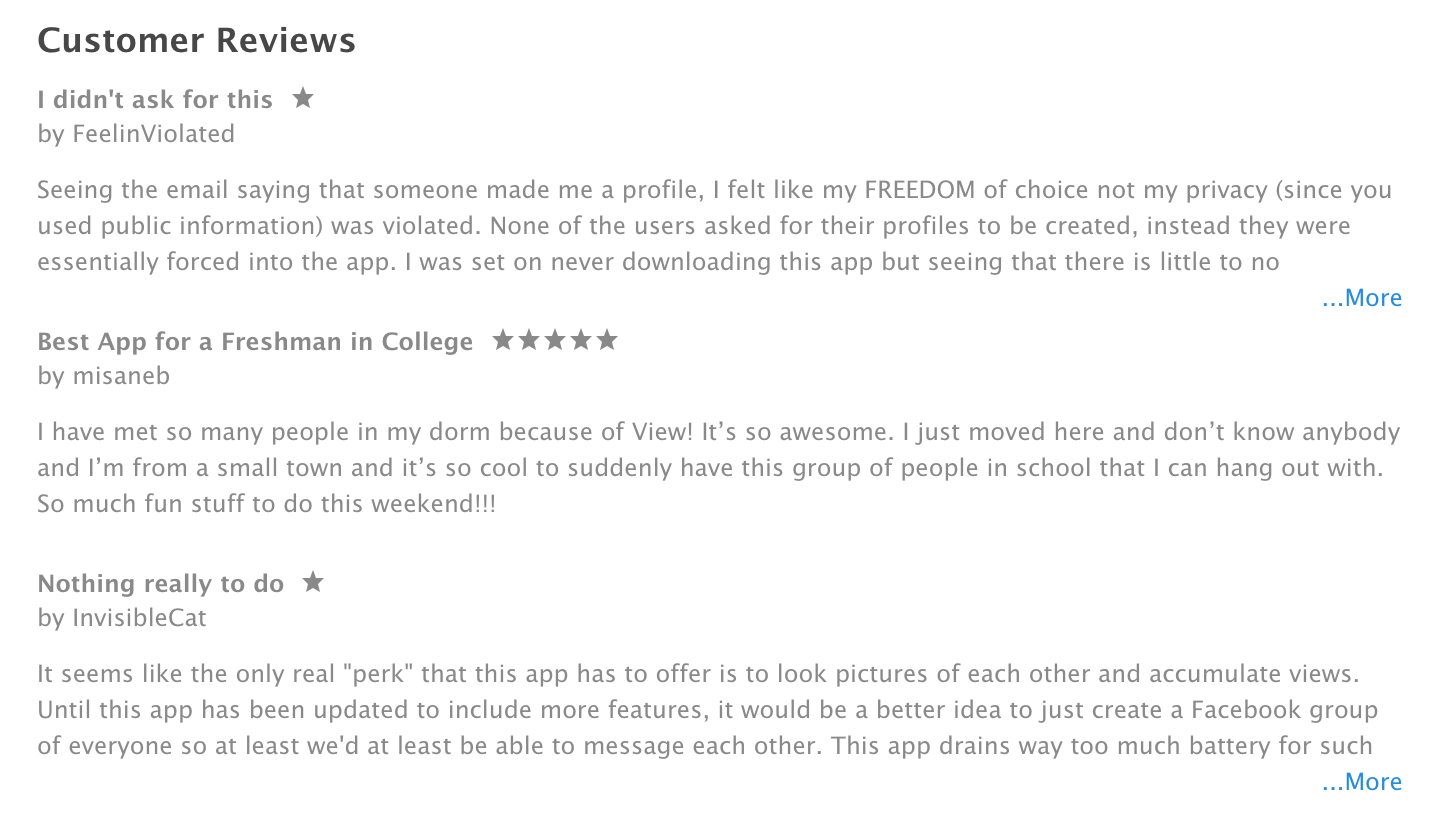 YayView has the same address on its site as Roll. The company producing Roll seems to be the same as Highlight, a similar location-based notification app. Also, the publisher of YayView on the app store has the same name as Highlight’s founder. This isn’t just some random person publishing scammy apps. They’re raised over $4 million in funding according to CrunchBase, and employ a designer and half a dozen programmers.

To recap on all this:

View violates privacy rights, lies about its intentions with your data, and employs numerous dark patterns in an attempt to drive engagement and probably please investors or something. Fortunately, people are pissed, and hopefully View will not be rewarded for this.

Edit (11/30/16): The company behind YayView has since been acquired by Pinterest, strangely enough.